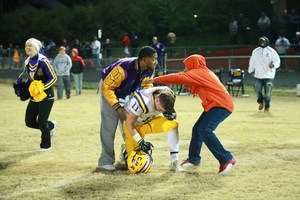 It’s off to Cookeville for the 3A final next Thursday against the Alcoa Tornadoes, a team with a strong tradition that has made 12 finals appearances under the tutelage of the state’s all-time winningest coach, Gary Rankin. Alcoa is the two-time defending Class 3A state champ.

Charger place kicker Alex Cook had spent the majority of the season taking care of kickoffs and extra points, doing a creditable job with both. Field goals had been a different matter. Called upon only three times all year, he made the best of it, though, nailing all three. The first two were 22 and 23 yards against Westview and Melrose, respectively. The third, a 35-yarder, will be remembered in the annals of Covington football for a long time. It sailed through the uprights with room to spare as time expired to lift the Chargers to a 31-28, come-from-behind victory at Pearl-Cohn Friday night in Nashville that advanced CHS to a fifth appearance in the state finals.